When Stonehealth first started selling the Jos stone cleaning system in the 1980s, the industry was awash with grit blasting, inappropriate chemicals and flooding all in the name of cleaning, yet doing irreparable damage to buildings. Even today these methods are still being used. Stonehealth has always had a different approach.

Are You A Contractor?

Discover What’s In It For You

Over the past 30+ years, Stonehealth has made further developments, including the introduction of the TORC and DOFF Integra systems, both of which have proven to be more effective than the Jos ever was.

Stonehealth systems have such a valued reputation with Architects, Conservation Officers and other specifiers, that less reputable companies have been known to claim that they have Stonehealth systems or are a ‘Stonehealth Approved Contractor’ in order to win contracts.

In discussion with Architects, Conservation Officers, specifiers and contractors, the company has been encouraged to tighten up the criteria for eligibility onto this list. The idea of the rosette standard has been enthusiastically supported since its launch in order to outlaw phoney contractors. 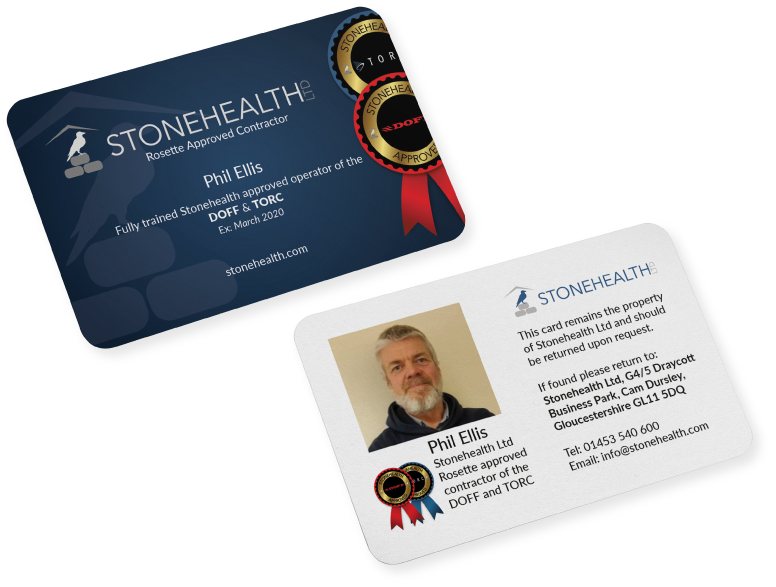 The new Stonehealth Rosette Approved ID Card. Available to all newly approved contractors and upon expiration of existing cards. 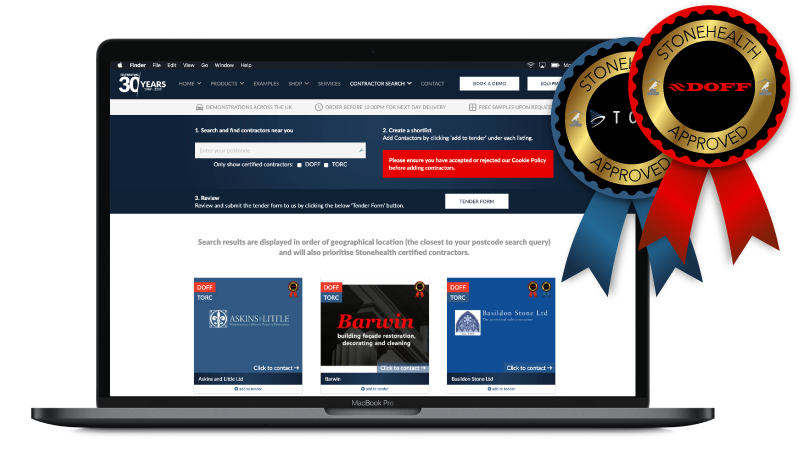 We maintain an online directory of ‘Stonehealth Rosette Approved’ contractors.

The directory is searched regularly by architects, conservation officers and customers alike, all of whom are looking to appoint contractors in their local areas to carry out work. The directory is unbiased and search results are based on geographical location (closest contractor to the search area), however, we prioritise contractors in the search results that are ‘Stonehealth Rosette Approved’. Commissions are never paid and referrals are completely FREE.

Machines are serviced regularly by a Stonehealth qualified engineer and approved by our lead technical director which certifies that the DOFF/TORC systems are safe and operating to their full potential.

To qualify for the Stonehealth Rosette Scheme