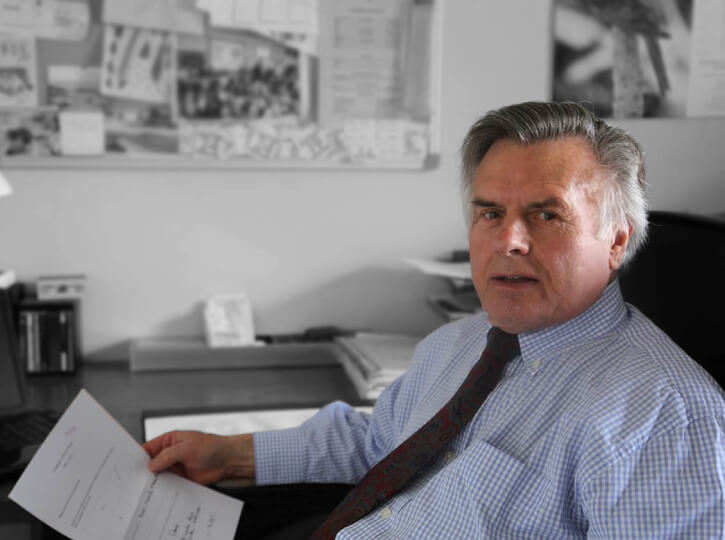 As the Managing Director of Stonehealth, Brian Crowe is no stranger to hard work.  How exactly did he go about building one of the most sought after stone cleaning specialist companies in the UK?

Working as a Director of an Italian textile company Brian decided in the 1980’s that he wanted to build his own company and make this an ethically and morally run business that would provide for his own and his family’s future.

After venturing out on his own Brian was inundated with offers from businesses who wanted to work with him.  One of these companies pitched to Brian a liquid that would help to consolidate the decaying surface of buildings.  Brian began talks with English Heritage and other companies about building cleaning and talks were quickly set up with a German company, which claimed to be able to clean buildings without causing any damage to the fabric of the building.

Demonstrations of this new method of cleaning which was known as JOS were arranged here in the UK.  An early trial was held at St John’s Church near Waterloo Station in London.  The Architect came along to the trial and approved the way JOS cleaned without damaging the building in anyway.  The Architect was also responsible for St. James Palace where work soon took place using this system. Word soon spread about this new and effective system and the master mason at Lincoln Cathedral carried out some trials and again approved.  The cleaning of Canterbury, Salisbury and Norwich Cathedrals and Westminster Abbey soon followed.

Brian recounted an instant where he found himself outside a building standing on around twelve inches of grit and brick dust, being told by the person responsible for the cleaning of the building that the surface was now completely clean.  Brian’s response was to express that the dirt hadn’t actually been removed but that the entire surface had been taken off instead.  Brian set out to ensure that his company and cleaning system would responsibly clean almost any building but if desired to leave the patina of age, which most Conservation Officers wish to retain.

After adopting the JOS method of cleaning, a few years later  the Company was faced with a major problem as the supplier went out of business.  Brian helped to develop a much improved system which is now known as TORC.  At the same time he started researching for another system that would complement TORC and remove more modern paints, particularly those of an acrylic nature. The DOFF system currently manufactured by the Company was developed following talks with a Conservator about the best way to remove the more modern paints. Brian now had another system to add to his portfolio of products and this was called DOFF after the old English word meaning “lifting off”   Not only did the DOFF successfully remove many types of paint and bitumen but the late Professor John Ashurst, who was probably the most informed stone expert there was, found that steam at 150°C would also kill off biological spores without the need to use harsh biocides.

In the early days Brian and his wife worked the business from their home.  It grew quickly and they soon had to take on staff.  They have had ups and downs in business – one of the ups was taking on a person who came to the business with numerous contacts and his experience only propelled the business further.  They had the unfortunate experience of an employee setting up a rival company copying exactly everything that Stonehealth was offering.  Brian and his wife never let the downs stop them from building the business with the assistance of a dedicated team.  Since then the business has gone from strength to strength.  In 2015 Stonehealth moved into larger premises and there are rumours that this too will soon be outgrown.

Brian set out to build a business with a family feel right from the start and the company is now in talks to set themselves up as a Trust so that all employees who contribute to its success can also share in the benefits.

Stonehealth really is the premier company for building surface cleaning systems with projects such as the Royal Shakespeare Theatre, Bath Abbey and the Sir Robert Ferguson Statue to name just a few of the recent projects.